Considering the deep cultural linkages between India and Japan erected over the great heritage of Buddhism, the Embassy of India, Tokyo has been dedicated to conducting various Buddhist activities in Japan. In the recent past, we undertook several activities to celebrate the shared cultural legacy of Buddhism between India and Japan, in association with our Japanese counterparts.

On May 19th, 2021, H.E. Sanjay Kumar Verma, Ambassador of India to Japan; Smt. Gunjan Verma, the spouse of the Ambassador, and Prof. Siddharth Singh, Director, Vivekananda Cultural Centre visited Shinshu Zenkoji Temple in Nagano prefecture to explore the temple’s strong connection with India in ancient and modern times. After learning about the origins and rich history of Zenkoji, the delegation offered prayers for deliverance from the pandemic at the main hall by the hidden statue of Amitabha Buddha and the Binzaru Statue. 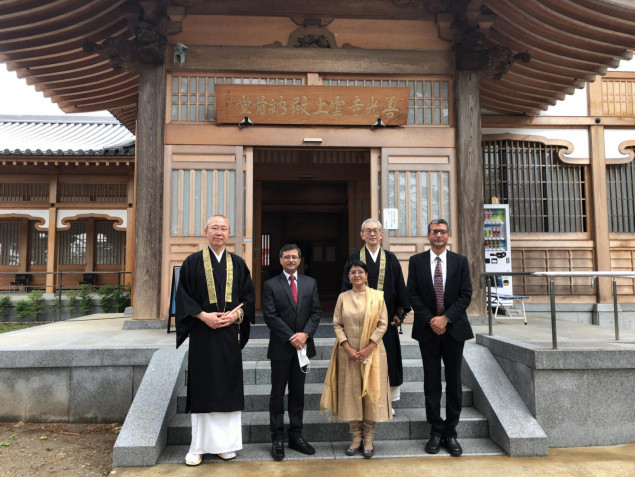 Zenkoji has the statue of Ikko Sanzon Amida Nyorai (Amitabha Buddha), which was brought to Japan from the Vaishali district of Bihar state of India and is the oldest Buddhist statue in Japan. The temple also has a special significance in the modern history of India-Japan relations, having the murals depicting the origins of the temple by the master painter Kosetsu Nousu - who is famous for his murals depicting the life of Lord Buddha at Mulagandakuti Vihara in Sarnath, India during the years 1932-36. Further, three white cows were gifted by the Government of India to Zenkoji in 1951 as a symbol of fraternity between the two countries and, after the demise of the cows, the temple has installed a statue to commemorate them. At the entrance of the main temple, the installation of the wooden statue of Binzaru i.e  Jivaka, the great personal physician of the Buddha and Sangha during 6th BCE, adds another attraction for the devotees. There is a strong belief among the visitors that by rubbing the body of Binzaru, one can get rid of the ailments and physical sufferings.

The Embassy delegation interacted with temple authorities led by Rev. Takanori Wakaomi, Chief of Temple Affairs; and Rev. Meishin Hayashi, Bureau Chief of General Affairs. At the end of the visit,  Ambassador Verma delivered a speech to the gathered media personnel and interacted with them.

On May 21st, 2021, an online conference titled "Relevance of Buddhism in the Time of the Pandemic" was held by the Embassy of India, Tokyo in association with Discover India Club. Prominent figures representing various sects of Buddhism in Japan; experts from India and Japan; and artists of classical Indian dance forms came together to organise a special programme highlighting the importance of Buddhist teachings during this unprecedented time characterised by the ongoing pandemic.

The programme commenced with an opening prayer by Rev. Ryosen Kono and Rev. Garyo Kono of Enmeiji Temple, followed by an opening address by H.E. Sanjay Kumar Verma, Ambassador of India to Japan, who remarked that, "Buddhism is emphatic on the inseparable connection between the mind and body – the complex interactions that take place between thoughts, body, and the outside world." This was followed by lectures by guest speakers Dr Masooma Rizvi, a renowned expert on Buddhist art; Rev. Kokei Kitakawara, Abbot Emeritus of Todaiji and Head Priest of Indozan Nipponji; Rev. Ryochi Gojo, Chief Abbot of Kinpusenji; Rev. Shojun Ogi, Chief Priest of Choshoji; and, Mr Nobuyasu Kaneko, Vice President of Discover India Club. The programme also featured cultural performances by Odissi dancer Ms Sachiko Ito and Bharatanatyam dancer Ms Kaname Tomiyasu. Video commentaries on the murals depicting the life of Lord Buddha by the master artist Kosetsu Nousu were also shown in the run-up to an exhibition on Master Nousu to be held in July. The online event concluded with remarks by Prof. Siddharth Singh, Director, Vivekananda Cultural Centre; and a vote of thanks by Dr Rabinder Malik, President, Discover India Club. Over 250 members of the public attended online and the news of the conference was covered by newspapers like Chugai Nippo, Bukkyo Times and the newsletter of Kimpusenji Temple.

On July 16th, 2021, a one-day conference on the contribution of the celebrated Master Painter Kosetsu Nousu was organized at the VCC auditorium of the Embassy of India, Tokyo. An exhibition of the Buddhist paintings of Mr Nousu was inaugurated by H.E. Sanjay Kumar Verma, Ambassador of India to Japan. In his opening remarks, he underscored the historical importance of the mural paintings depicting Buddha’s Life in Sarnath done by Master Kosetsu Nousu. A restoration project of the paintings done by Japanese master painter Kosetsu Nousu is going on at the Mulagandha Kuti Vihar Buddhist temple, Sarnath, Varanasi in association with the Mahabodhi Society of India. In 1918, Kosetsu Nousu, an ardent Japanese Buddhist, came to India, drawn by the aesthetics of the Ajanta mural paintings. Kosetsu Nousu made copies of ancient Indian paintings at Ajanta Caves and then did paintings on the walls of the temple depicting major events of the Buddha’s life during the year 1932-36. The temple is celebrated for being built at the same place, where Lord Buddha delivered his first sermon and the temple contains the body relics of the Buddha. This event was the second in a row after the kick-off event to propagate the information about the same was held at the Embassy of India, Tokyo on Oct. 31, 2019.

The programme was comprised of the following speeches: Opening remarks by Ambassador Sanjay Kumar Verma, “Introduction of Kosetsu Nousu” by Mr Shigeki Mizobuchi, Curator;  “Restoration Work of the Kosetsu Nousu’s Paintings at Sarnath” by Mr Hayato Onomura, President, Saishiki Sekkei Corp.;  “History of Buddhism in India and Transmission of Indian Deities to Japan” by Prof. Siddharth Singh; “Influence of Kosetsu Nousu and his relationship with Zenkoji Temple” by Rev. Binryu Wakaomi, Chief Priest, Byakurenbo, Zenkoji; Remarks from Nousu family by Mr Yoshimitsu Nousu, grandson of Kosetsu Nousu and Vote of Thanks by Mr Yosuke Ikuta, President of the Society for Honouring the Master Artist Kosetsu Nousu.

On July 26th, 2021, an exhibition cum conference dedicated to great Buddhist Zen master Hakuin Ekaku was held at the VCC auditorium of the Embassy of India, Tokyo. Hakuin Ekaku is undeniably one of the most important of all Zen masters. He came into the Rinzai school of Zen and revitalized it during a period when its very survival was in question, focusing practice back on the basics of zazen and koan study. He was the quintessential Zen master of the people, who extended his teaching far beyond the monastery to include folks from all walks of life. The programme contained the following elements: Opening remarks by Ambassador Sanjay Kumar Verma, Speeches by Prof. Shigeo Araki, Rev. Isshin Yamada, H.H. Enmei Miyamoto, Chief Priest, Shoinji, Hakuinshu, Prof. Siddharth Singh, Director, VCC, Dr Shinji Horiuchi, and Vote of Thanks by Mr Kinji Hashimoto, Vice President, Japan-India Cultural Exchange Network. 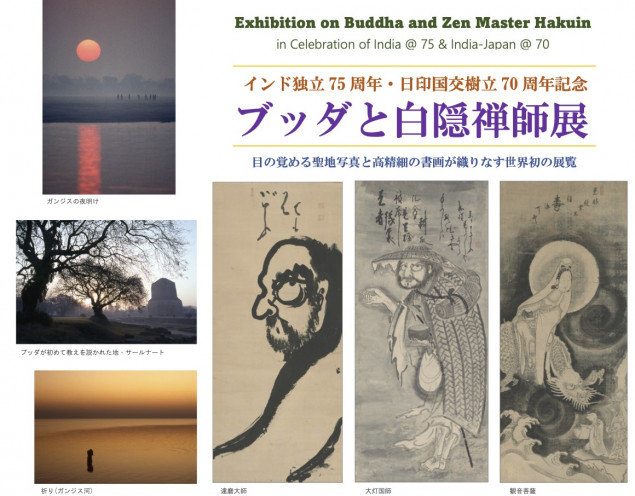 All these events were a part of celebratory activities for India@75 and India-Japan@70. The Embassy of India, Tokyo is looking forward to organizing many more such events in association with the Japanese Buddhist Organizations in the future too.